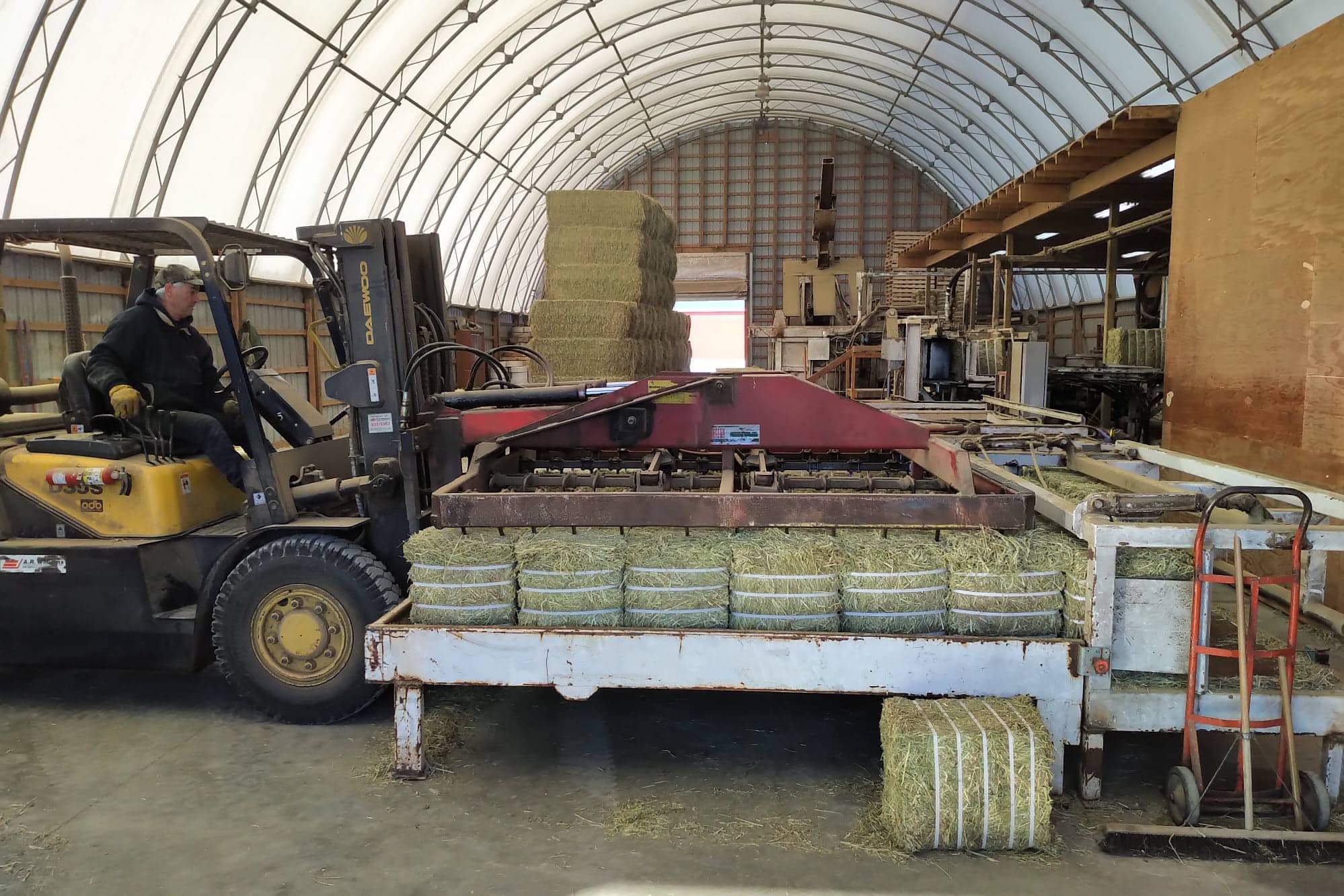 The Ontario Hay and Forage Co-operative was recently incorporated in order to develop and operate a double hay-compacting facility which will compact, bale, and export high quality hay to growing overseas markets. The Co-operative is aiming to increase returns for hay producers by enabling farmers to obtain higher prices for their hay. By working with producers to establish on-farm hay-drying facilities, and building a facility to compact their hay into compressed square bales which can be shipped overseas in 25 tonne containers, the Cooperative intends to offer a premium product to buyers in the livestock and equine sectors.

Because of the frequently humid climate here, Ontario farmers are generally unable to maximize their production of premium hay. Even with good drying conditions, the on-farm storage of hay with 18-20% moisture content often results in the deterioration of hay quality. While in Western Canada it is feasible to bale hay and store it outdoors, in Ontario the maintenance of superior hay quality requires artificial drying to reduce the moisture content down to 12% or less in order to prevent mold formation, even when stored indoors. Improving the quality of Ontario hay to ensure its attractiveness to overseas buyers requires on-farm drying of hay. Dried hay, with a moisture content not exceeding 12%, can then be successfully compressed and shipped overseas in containers without risk of mold formation.

The proposed hay compacting facility is currently planned to handle up to 100,000 tonnes annually. The actual capacity will be determined based on an analysis of the potential export markets and equipment costs for the facility. Based upon initial industry information, a state-of-the-art double hay-compacting facility is estimated to cost between $10 and $15 million, assuming that all drying and storage occurs on farm. The Co-operative expects to target growing export markets for high quality hay, particularly in the dairy and equine sectors, including markets in Asia, the Middle East and the EU.

The Co-operative is the outcome of efforts by the Marketing Forum of the Ontario Forage Council to tap into new markets for Ontario hay.

The Co-operative is investigating both available off-the-shelf hay-drying equipment and working with local equipment manufacturers to identify the most cost-effective drying technology available. The focus is on dryers which can handle large square bales in a variety of sizes. Based upon– preliminary information obtained from industry participants, the Co-operative has developed initial rough estimates of the capital and operating costs for dryers. These figures are only tentative and will be refined considerably as part of the Feasibility Study.

The capital cost of dryers is dependent on the size of the dryer and the Feasibility Study will examine any economies of scale possible with larger dryers. Producers will need to look at their haying and other farm operations to determine the optimal size of their dryer for their farm based on the anticipated volume of hay they will need to dry.

Manufacturers of commercially available hay dryers, such as the Veda Farming hay dryer, indicate that their hay dryers can effectively process four turns of hay per 24 hours when drying hay from 25% moisture to 12% moisture. To ensure optimal hay quality, producers would want to size their dryers to be able to dry all of the hay they harvest within no more than 24 hours of baling, assuming the hay has a 25% moisture content. This 24 hour time frame could potentially be extended with lower moisture hay.

Producers growing 200 acres of hay, with an average first cut yield of 1,400 3′ X 3′ X 8′ square bales {approximately 525 tonnes) may wish to consider harvesting 25 acres at a time, meaning that they would need a hay dryer capable of handling 175 square bales in 24 hours or roughly 45 square bales at a time. Generally, hay dryers are kept outdoors but some manufacturers claim that there are energy efficiencies in enclosing the hay dryer inside of a building, provided the building is properly insulated and ventilated.

Based upon limited industry information obtained to date, it appears that total operating costs for a hay dryer, including both energy and labour costs, generally run between $15-25 per tonne depending on moisture content and energy prices. That figure does not include capital costs {depreciation) or financing costs {interest). The Veda Farming hay dryer website contains a cost calculator which is a useful starting point for estimating energy costs.

Preliminary industry information suggests that hay dryers capable of drying up to 40 squares bales at a time (160 bales per day) would cost on the order of $100,000 – $150,000, although there are certainly state-of-the-art European models which cost considerably more than that. Custom fabricators and local equipment manufacturers have indicated that it may be possible to build suitable hay dryers for as little as $75,000, although no such models are currently on the market in Ontario. For a producer with total annual hay production of 2,500 large square bales, the up-front capital cost of such a dryer would be on the order of approximately $40-$60 per bale of annual capacity. Amortized over ten years, exclusive of financing costs, the annual capital cost would be somewhere on the order of $4-$6 per bale.

Members will not be required to sign a Supply Agreement or purchase any preference shares until the Co-operative obtains approval for an Offering Statement from the Financial Services Commission of Ontario.

The Co-operative will be conducting a comprehensive Feasibility Study to determine the viability of the proposed project, including the financial feasibility of on-farm drying of hay and the identification of cost-effective hay-drying technology. If that study indicates that the project makes good business sense, the Co-operative will prepare a full Business Plan. The Business Plan will identify the location of the proposed facility, the equipment to be utilised, all anticipated capital and operating costs, target export markets, shipping logistics, and will include detailed final projections. This Business Plan will form the basis for the Co-operative to approach senior lenders. A summary of the Business Plan, including all project risks, will be set out in an Offering Statement to be circulated to producer members interested in investing in the Co-operative.

The Co-operative is seeking Government assistance to cover a portion of the costs associated with the Feasibility Study, Business Plan, and project development. Producer investment is critical both to match possible Government funds and to demonstrate producer commitment to the project.

The founding Directors of the Co-operative are all Ontario hay producers with many years of experience in growing and marketing hay, including Fritz Trauttmansdorff from Jerseyville (Chair), Don Rowntree from Georgetown (Vice Chair), Jonathon Blydorp from Grand Valley (Secretary-Treasurer), Larry Davis from Burford, Andre Larocque from Glen Robertson, Chris Martin from Alma, and Chris Riach from Woodstock.

George Alkalay of Northfield Ventures Ltd. has been engaged to prepare the Co-operative’s Feasibility Study and Business Plan, and to provide support with overall project development. Edward Shaw of Green Prairie International Inc. will assist the Co-operative in obtaining critical market intelligence and gain export market access. The Co-operative has contracted with the Grey County Agricultural Services Centre for the provision of administrative services.

For More Information and to Join …

For more information, or to obtain a Membership Application, please feel free to contact any of the Co-operative’s founding Directors: